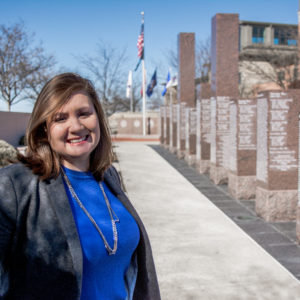 Nikki works for GE Aviation and is a graduate of the US Air Force Academy and is in her 14th year of military service where she has 3,000 hours and over 200 combat missions as a pilot. She is a first generation American, as a daughter of an auto mechanic and civil servant,who were both immigrants who came to America as children and worked hard to create better opportunity for their family. Nikki, her husband Rob and son Wyatt are proud to call Mason home.

While serving as an Air Force officer and pilot, Nikki earned a master’s degree in diplomacy. Nikki was a combat pilot in the MC-12, commanding reconnaissance missions, at Bagram, Afghanistan. Nikki finished active duty as a KC-10 instructor pilot. Her military decorations include the Meritorious Service Medal, eight Air Medals, and the Afghanistan Campaign Medal.