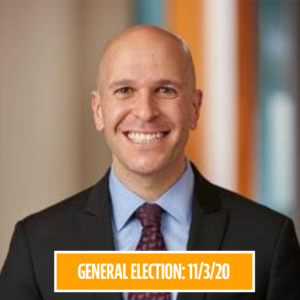 Bob previously worked for the State of Illinois where he served as the lead attorney for implementation of the the Affordable Care Act and as director of the Illinois Medical Cannabis Program. Bob’s work on state legislation supporting the ACA helped ensure over 650,000 Illinois residents were covered under ACA’s Medicaid expansion. The state’s medical cannabis program has already helped over 18,000 residents struggling with debilitating medical conditions like cancer and PTSD, and Bob continues to advocate for patients still waiting for access to the program.

Bob is a current Board Member of the Anti-Defamation League, on the Board of Trustees of Equip for Equality, and a member of Temple Beth El in Northbrook. Bob has been active in politics serving as Jewish Outreach Director for both Pat Quinn and Hillary Clinton in Illinois, as well as for Barack Obama in Florida in 2008.