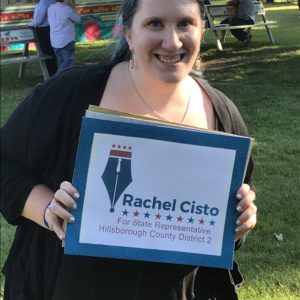 Rachel Cisto is a native of Weare, NH and is running as a Democrat in a conservative district. She received a bachelor's degree in Media and Journalism with a minor in American Politics from the University of Hartford in 2015. She has been a political reporter since 2009, most recently at the Daily News-Record in Harrisonburg, VA and the Chief-Leader in New York, NY. In September 2017, she was appointed to the Weare Town Cable Committee, where she creates programs for the public access channel, including a documentary about FIRST robotics. Her earliest political memory is voting for now-Sen. Jeanne Shaheen for governor at a 'kids vote' event in 1996, and her favorite political memory is hiking in Shenandoah National Park for a story with Va. Sen. Tim Kaine.