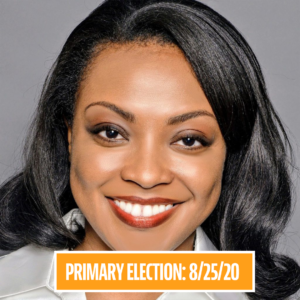 The Honorable Dotie Joseph is the State Representative for District 108 in Florida’s Legislature. Representative Joseph was born in Haiti and raised in Miami, where she attended public schools, studied hard, and went on to graduate from Yale University.

At Yale, the young community activist co-founded Yale’s Haitian Student Alliance, and served as the Political Action Chairperson of the Yale N.A.A.C.P. Drawn to public service, the student served as the Legislative Correspondent for U.S. Representative Peter Deutsch in DC, and Acting Youth Director for Eglise Beraca in Miami.

Passionate about civil rights, Ms. Joseph sought to hone her advocacy by earning a law degree from Georgetown University Law Center. Committed to combating discrimination, Ms. Joseph interned with the national Lawyers Committee for Civil Rights Under the Law, externed with the Civil Rights Division of the U.S. Department of Justice, and served as the 2003 Frankel Fellow for Human Rights First.

Driven by Martin Luther King, Jr.’s quote, 'Injustice anywhere is a threat to justice everywhere,' Ms. Joseph worked on human rights issues in Egypt and Uganda; interned for the National Coalition for Haitian Rights; and interned with President Carter at the Carter Center, focusing on Latin America, the Caribbean, and West Africa.

After graduating from Georgetown, served as the Judicial Law Clerk to the Honorable Judge Eugene Hamilton, a Civil Rights Litigation Consultant, an employment discrimination litigator, and Deputy City Attorney for the City of North Miami Beach.

Representative Joseph has received a 'Woman on the Rise ' award from the Dade County Bar Association, a '40 Under 40″ award from Legacy Magazine, and was honored as a 'Woman of Substance' by the Miami-Dade County Board of County Commissioners.