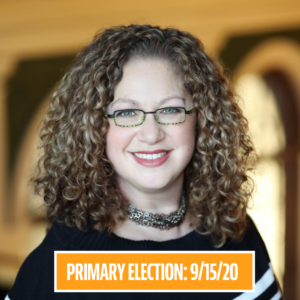 Senator Becca Rausch was elected to the Massachusetts Senate in 2018. She represents the Norfolk, Bristol and Middlesex District, which consists of all or part of Attleboro, Franklin, Millis, Natick, Needham, Norfolk, North Attleborough, Plainville, Sherborn, Wayland, Wellesley, and Wrentham.

The granddaughter of a Holocaust survivor and a published author on reproductive health and justice and body size and the law, Senator Rausch is a lifelong advocate for social justice, fairness, and equality for all. Senator Rausch’s legislative priorities include voting rights, universal access to quality and affordable health care, reproductive health and justice, improving public transportation, supporting families, education, information accessibility and data privacy, and transparent and accountable government.

Prior Rausch’s election to the Senate, she served as an elected Needham Town Meeting Member and a Secretariat-level attorney in both the Patrick and Baker administrations. She is a former law professor and scholar, and private sector lawyer. Rausch holds degrees from Brandeis University (B.A.), Northeastern University School of Law (J.D.), and the University of California, Berkeley, School of Law (LL.M.). She resides in Needham with her spouse, their two young children, and their floppy, loving Goldendoodle.

Senator Rausch’s election in 2018 flipped a formerly solid Republican district which previously elected Republican Senator Scott Brown. She is the third woman, the second Democrat, and the first Jewish person to hold her seat.