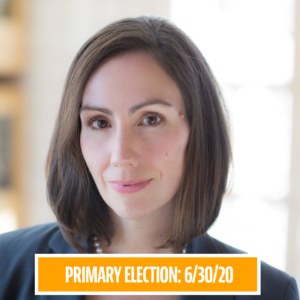 Alexis King is running to be the next District Attorney for Colorado’s First Judicial District, an office never held by a woman. Alexis served as a prosecutor in the First Judicial District for a decade where she built a reputation as an ethical prosecutor and collaborative leader. Alexis spearheaded progressive programs to keep kids out of the justice system and detention facilities. She served as the lead human trafficking prosecutor in her District and an expert voice for Colorado. Alexis’ dedication to collaborative work took her to the bench. As a magistrate, she was a key player in bond reform efforts to address the over incarceration of people facing poverty, mental illness, and addiction.

Alexis is running to continue her work on prosecution alternatives, bond reform, and transparency, while ensuring her community is protected from those who exploit and harm vulnerable people. Alexis began her career in a non-profit serving survivors of intimate partner violence and is currently an attorney for survivors of gender based violence in schools. She lives in Golden with her spouse and two children.