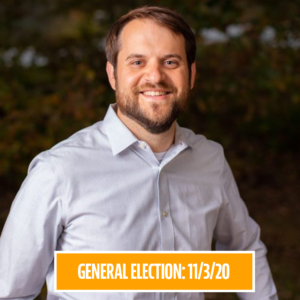 Parker grew up in Winston-Salem and moved to Buncombe County in 2007 after graduating from Appalachian State with a degree in Community Planning and Geography. He was lucky to be raised by a single mom who taught him the importance of service and giving back. Parker and his wife, Maia, an elementary school teacher in Buncombe County, live in Candler with their one-year-old son, Austin.

Parker now works at a national utility scale solar energy company in Asheville where he works with local governments across the South in an effort to move our nation away from fossil fuels and toward a 21st century clean energy economy.