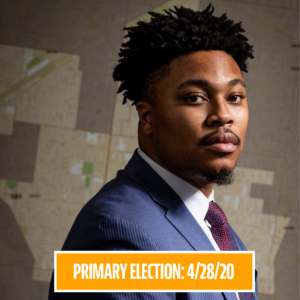 Malcolm Kenyatta was elected to serve as state representative for the 181st Legislative District, Philadelphia County, on November 6, 2018. He is a product of Philadelphia public schools, a graduate of Temple University, and Harvard Kennedy School’s Senior Executives in State and Local Government.

He currently serves as Vice Chair of the Philadelphia Delegation and as a member of the Governor’s Taskforce on Suicide Prevention as well as a host of committee leadership positions. As the first openly LGBT person of color and one of the youngest members elected to the PA General Assembly, he is deeply committed to creating an equitable and inclusive society.

As a legislator he has championed proposals to address generational poverty, raise the minimum wage and protect workers rights, increase access to mental healthcare, common sense measures to address gun violence, and protecting our digital infrastructure.

In 2016, he was elected as Delegate to the Democratic Convention (PA 2nd), garnering the second highest vote total of any delegate in the Commonwealth. He has also appeared on local and national media outlets to discuss systemic poverty, affordable education and childcare, and how to make government more accountable to citizens. His election was turned in an award winning short documentary, ‘Going Forward’ produced by Seven Knot Productions which premiered on ‘The Atlantic Magazine Selects’ in 2018.