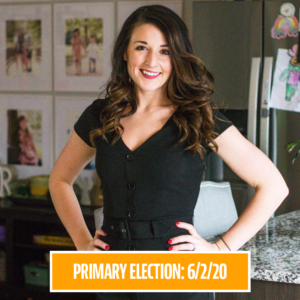 Brittney Rodas is running for State Representative for the 105th Legislative District in Pennsylvania which includes Lower Paxton, South Hanover and West Hanover. Prior to announcing her candidacy, Brittney worked at the Pennsylvania House of Representatives as a policy and research analyst where she was responsible for legislative drafting, analyzing policy and serving constituents and stakeholders from across the Commonwealth. While at the Capitol, Brittney focused on a wide range of policy issues including health and human services and liquor control.

Brittney graduated from Penn State University with a Master’s in Public Administration, focusing on public policy. At Penn State she also earned a graduate certificate in public sector human resources. Her undergraduate studies were in community organization and social services. After graduating from Penn State, Brittney received the Clem E. Gilpin Award for outstanding commitment to her community. In addition, Brittney is a graduate of the Robert J. Thompson Eastern Leadership Academy.

Brittney is a Dauphin County Committee Person and served as the South-central Region Director for the Pennsylvania Young Democrats where she was responsible for organizing young voters and advocating for issues important to young voters. She is also a member of Mom’s Demand Action and Tri-County Federation of Democratic Women. Brittney has also spent time working with various non-profits assisting with fundraising and outreach.

Brittney’s desire to serve stems deeply from her upbringing. She is the daughter of her late father, a Vietnam veteran and former steelworker and foreman, and was raised by a single mother who worked as a school bus driver. Being raised by a single parent she is familiar with the struggles that many families face throughout her community, inspiring her to ensure a brighter future for her children.