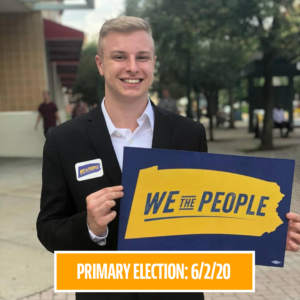 Michael Blichar is a young candidate running for state representative in Pennsylvania House District 187. He is running to bring back transparency and accountability to the state legislature. Michael is a proud resident of Kutztown, PA, and has a record of fighting for the people of his community as well as advocating for the issues that matter to them most. In the past, he has served on the Kutztown University Council of Trustees and worked with the Obama White House on the It’s On Us sexual violence prevention campaign. Currently, Michael serves as secretary of the Kutztown Borough Planning Commission and is a member of the Berks County Democratic Committee.

Michael had the privilege of serving as the candidate for State Representative in 2018 (and endorsed by Run for Something), however the fight to restore the peoples’ voice did not end there. He believes that the most important stakeholder in government is you, and he will fight to put the people of his district first.