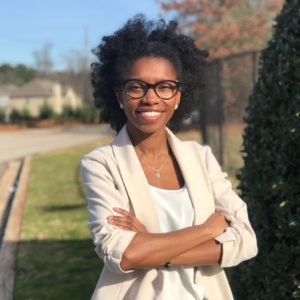 Ebony is the daughter of a union steward in a McDonough, GA factory and a United States Postal Service employee. Ebony’s mother first introducer her to civic engagement, taking her voting, volunteering, and accompanying her to protests. Ebony is an alumna Henry County High School and Georgia State University where she studied and received her degrees in Anthropology and Political Science, and is a first-generation college graduate.

Ebony is running for office because, for too long, the people in her district have not had a choice in who was representing them. She is running because there are too many Georgians who cannot afford holistic healthcare and others who are afraid they may lose their right to choose. She is running because there are discriminatory practices throughout Georgia that are hindering some of the population from thriving instead of just surviving. She is running for office because she believes the people across Georgia should have both affordable higher education and choices in what they decide to do post-secondary education. An overall theme of Ebony’s campaign is choice, and she hopes the people will choose her for State Representative for Georgia’s 110th House District.