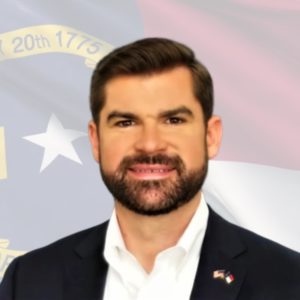 JD is a former US Air Force officer and engineer, Rhodes Scholar nominee, and now an intellectual property attorney whose family has called North Carolina home for more than twenty generations. He is a candidate for the North Carolina State Senate in an open seat district, which has been targeted as one of the five likely 'flips' the Democrats need to take the majority in the chamber.

JD recognizes that educated citizens drive a strong economy, and that public education should be equitable and accessible to all no matter their zipcode or socioeconomic background. Long before coronavirus, JD advocated for the expansion of Medicaid in North Carolina to provide much needed resources to rural and ex-urban areas like his district. Finally, elections are only fair when voters are choosing their representatives, and not the other way around. When Democrats hold the majority, JD will advocate for independent, nonpartisan redistricting.