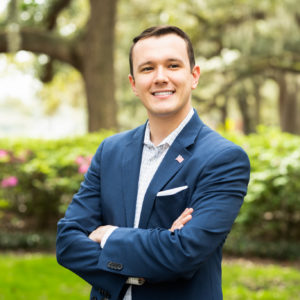 Mac was born and raised in Georgia, first hearing the call to public service in high school, and attending the United States Military Academy at West Point. After college, Mac was stationed at Fort Stewart Georgia where he served as an Army Officer. As a civilian, Mac has continued serving his community as a member of the NAACP, the Democratic Party of Georgia, and as an officer in the Chatham County Democratic Party.

Today, Mac seeks to return to government as a member of the Georgia General Assembly in State House district 163. Mac is excited to bring fresh representation to Savannah rooted in ethical public conduct and deep understanding of public policy. When elected, Mac will push for the expansion of medicaid, the improvement of dilapidated flooding infrastructure, and for expanded funding for Georgia’s public schools.